Installation of Dinosaur for G20 Summit

Our driver, Warren, on site in Queens Park, Brisbane City. 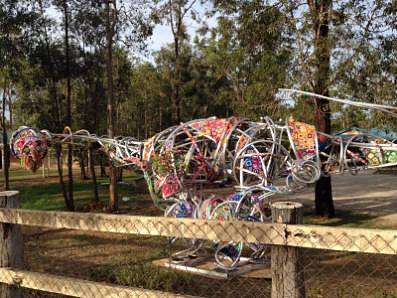 This is the finished Dinosaur, with her crocheted skin.

For all transport needs call us on

It all started with an unusual phone call on Saturday. The lady asked if we could move a piece of artwork but couldn’t tell me what it was or where it was going. That instantly piqued my interest. I told her about moving the original casting of the Winton Stampede, for the Queensland Museum.

A few days later she rang and booked the job.

It had been commissioned by the Queensland Government for the Cultural Celebrations of the G20 Summit.

It was way too big to put together in the workshop, so it had to be bolted together in place. It was a challenge to get it to sit well on the truck due to the unsual shapes. It took 2 nights and a half day to get the pieces together as each one had to be held in place by the crane while being bolted together in Queens Park, Brisbane City.

It was then covered with crocheted pieces for skin. A flyer was put out in the community with the pattern to see if anyone would like to contribute and they received crocheted squares from all over Queensland, some with little notes others just shoved into boxes or bags.

An amazing experience for us and we are proud to have been a part of it.

Click here to watch the video of it being delivered – https://www.youtube.com/watch?v=P1DW_ggUNeo

Zenith tidbits of wit and wisdom

Eighty percent of success is showing up
~ Woody Allen